Home › Journal of Physics G: Nuclear and Particle Physics › Is there dark matter in our neighbourhood?

Is there dark matter in our neighbourhood? 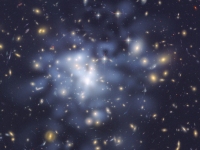 Where is all the dark matter? (Image: Hubble)

Dark matter is an elusive substance that is believed to account for most of the mass in the universe. However, it could be hiding closer than we think, as discussed in a recent Physics World blog on a new preprint submitted to the arXiv.

It’s not just the Sun that might harbour dark matter in our neighbourhood. It could be all around us – cosmically speaking! What do we know, and just how much is there? In order to find out, Justin Read of the University of Surrey, UK, recently reviewed almost 100 years of effort into this very topic, bringing dozens of studies together  into one accessible article in JPhysG.

In addition to an in-depth discussion of experimental, theoretical and numerical developments in calculating the local dark matter density, Read looks to the new Gaia satellite and how it will refine and improve our understanding of dark matter.