ICM 2015: magnetism in a Mediterranean metropolis

At the start of July, JPCM‘s Sarah Whitehouse and myself attended the 20th International Conference on Magnetism; ICM 2015. Held at the Palau de Congressos de Catalunya in Barcelona, Spain we had the opportunity to hear about some exciting magnetism research being performed both in the Spanish magnetics community and further afield.

Attendees were eased into the week with a welcome reception held within the beautiful gardens of Palau de Congressos de Catalunya. With the sun beating down, the pool looked increasingly more enticing. 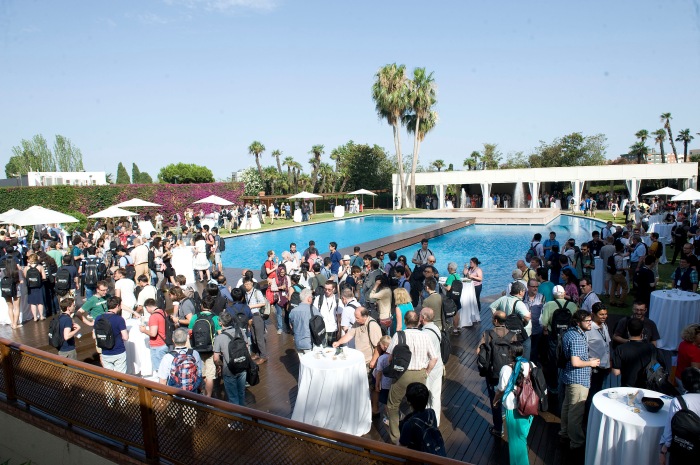 A chat with the conference chair

How does ICM 2015 compare with previous ICM conferences?
ICM began in 1958 and since then, it has steadily grown. The 2003 event, held in Rome, saw a significant jump in attendance — from around 1,000 attendees in previous years to 2,000 — partly due to the appealing location but due to a slight shift it the organisational style. This year, we’ve had over 2,100 delegates, with 58 countries represented including around 25% delegates from Japan and Korea. We’re also very pleased with the geographical spread of the presenters; of the 650+ talks, over 40 countries were represented. Around 20% of speakers were women which we would definitely like to see increase. All of this illustrates the international nature of magnetism research and confirms the conference programme is attractive to researchers worldwide.

How did you go about organising this year’s conference?
For ICM 2015, we split the contributions across 5 topics, with around 50 sub-topics. The aim of the organising committee was to have a good balance across each of the 5 topics which isn’t always easy. In total, we invited over 100 talks, and received abstracts for more than 520 oral presentations and 1,700 poster presentations.

Which area(s) of magnetism do you work in?
Magnetic nanoparticles mainly, with over 35 years of experience in this area, although I have also worked on spin glasses in the past.

What’s the ‘next big thing’ in magnetism?
Unfortunately, magnetism consists of many dead areas, however areas of magnetism which are important are small particles, energy storage and hard magnetic materials. Also, spintronics and skyrmions are particularly hot right now.

There were several thoroughly interesting and very well attended talks at ICM 2015. One such example was a talk on Phonons, magnons and spin current from Sadamichi Maekawa (Advanced Science Research Center, Japan Atomic Energy Agency) and, as shown in the image below, the room was full to bursting! The eagle-eyed amongst you might even spot me stood at the back. 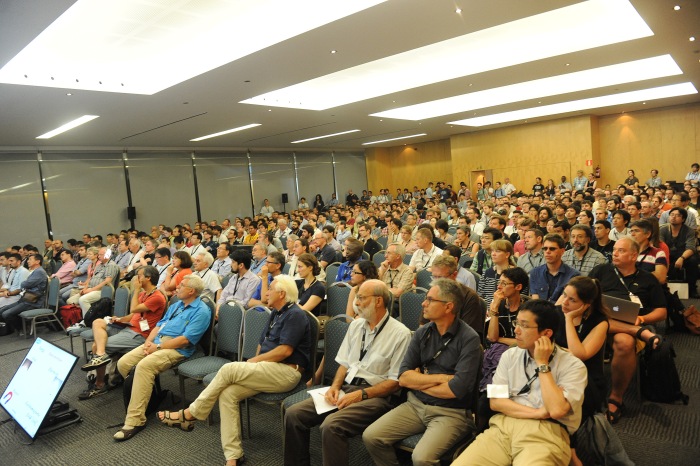 For us at IOPP, conferences are an equal mix of manning the stand in the exhibition area, in order to talk to authors, referees and readers; and attending talks to survey the research landscape. Here are just some of the talks we attended and wanted to highlight.

Engineered nanoparticles for Magnetic Particle Imaging: Tailoring physics and chemistry to clinical applications — Kannan Krishnan (University Of Washington, Seattle, United States)
Professor Krishnan explained the goal here is to make Magnetic Particle Imaging (MPI) a technique which can compete with computed tomography (CT) angiogram. One example of an area in which this is important is chronic kidney disease, in which iodine/Gd is intolerable. He discussed the advantages of MPI: very good resolution and a sensitivity which compares well with other techniques. It also works well since tissue is diamagnetic and thus, allows good contrast compared with some other techniques. Following an explanation of two different MPI approaches – time and frequency domain – he showed us that their technique has a much narrower Point Spread Function (PSF) compared with commercial devices and thus higher resolution, as well as higher intensities. For the future, it is necessary to optimise MPI and magnetic nanoparticle tracers which involves the development in four main areas: i) physics and engineering, including examining the effect of the magnetic nanoparticles’ size and distribution on the MPI resolution; ii) material chemistry & biochemistry, particularly synthesis; iii) pharmacology; and iv) translational medicine, that is, creating a real-world, competitive diagnostic tool.

Heat-Assisted Magnetic Recording – Turning Plasmonics and FePt Media into a Product — Barry Stipe et al (HGST, A Western Digital Company, San Jose, United States)
Dr Stipe discussed the current technology of Heat-Assisted Magnetic Recording (HAMR) and some of the challenges it faces. At present, it isn’t possible to reduce the grain size for magnetic recording since you enter the realm of thermal instability. Some other revolutionary solutions, in addition to HAMR are microwave-assisted magnetic recording with a spin torque oscillator is used (STO) used, and bit patterned media which employs imprint lithography. HAMR or thermal-assisted magnetic recording is the primary scalable technology and has already achieved 1.1 terabytes per square inch, with an opportunity to achieve 4 terabytes per square inch. The current challenges with HAMR include laser cost, head readability, cost of the media and substrate and also the physical process of writing to the device. Also touched on was the idea of the ultimate hard disk drive (HDD) technology by combining HAMR and patterned media.

Magnetic Nanostructures for Magnonic and Logic Applications — Adekunle Adeyeye (National University Of Singapore, Singapore, Singapore)
Dr Adeyeye began by saying over the last few years, his group had been looking at magnetic nanostructures in magnonics research, where magnonics crystals are analogous to photonic crystals, providing unique features from their periodic arrangement. More specifically, spin waves instead of light can be manipulated in the same way, for example by etching grooves into a yttrium iron garnet (YIG) substrate and the depth of the groove allows for amplitude control. It is also possible to produce further control by adjusting the relative contrast, or quantity of the materials. He went on to discuss magnetic logic and the effects of configurational anisotropy. The chair gave the polite ‘5 minutes remaining’ warning to which Dr Adeyeye replied with “OK, I will move like a bullet now!” The talk finished with discussion of a rhomboid nanomagnet and creating reconfigurable magnonic crystals.

Electric Manipulation of Spin Textures — Axel Hoffman (Argonne National Laboratory, Argonne, United States)
Dr Hoffman began with a discussion on spin waves and skyrmions, delving into spin waves in curved structures – with a great pun on whether spin waves can ‘turn a corner’ – in which a current is applied to a magnetic wire and as the wire curves, the magnetisation follows the curvature. Using Brillouin light scattering, it is possible to map the excitation. Applying direct currents provides better guidance of the spin waves and he illustrated the function of a spin wave multiplexer in which a permalloy wire with a gold electrode is split to form a Y shape and spin waves can be sent either left or right. At this point, due to a technical glitch, the presentation stalled and had to be restarted but Dr Hoffman was unperturbed! He moved on to talk about magnetic skyrmions, which received a great deal of attention at the conference. They are interesting for many reasons: you can move them around with rather small currents, they are expected to easily move around defects, they can be of a few nanometres in size (atomic length scale), and they behave like individual quasi-particles. Thus, it is possible to use them in encoding data, similar to racetrack memory. In short, it is now possible to generate and delete skyrmions at a moment’s notice. The talk concluded with ‘skyrmion bubbles’ (related to inhomogeneous chiral spin orbit torques) and attempting to investigate individual skyrmions.

Professor Gutfleisch began by illustrating the distribution of CO2 emissions and with the ever increasing complexity of technology and devices, it is more much more difficult to recycle and re-extract their critical elements. Transition metals do have high recycling rates of around 50% however, lanthanides are much lower at less than 1%. With a transition away from nuclear energy and fossil fuels, rare earth elements (REE) become important. He went on to show a forecast of the world’s RRE supply to 2020 with a growth in permanent magnets. These are used in direct drive wind turbines and sintered NdFeB magnets are used for electro-motors. It was interesting to see the designing of a super magnet being compared to batternburg cake. Also discussed was using NiMn based Hesuler compounds in the pursuit of green technologies.

Thursday evening saw some wonderful traditional Spanish entertainment during the ‘Spanish Night’ held in Poble Espanyol; a walled village in Montjuïc Park built in 1929. Within its walls are replicas of more than 100 typical buildings, streets and squares from all over Spain. The social event was well attended and was a fantastic opportunity for delegates to socialise and experience some local culture during what was a very full conference schedule. 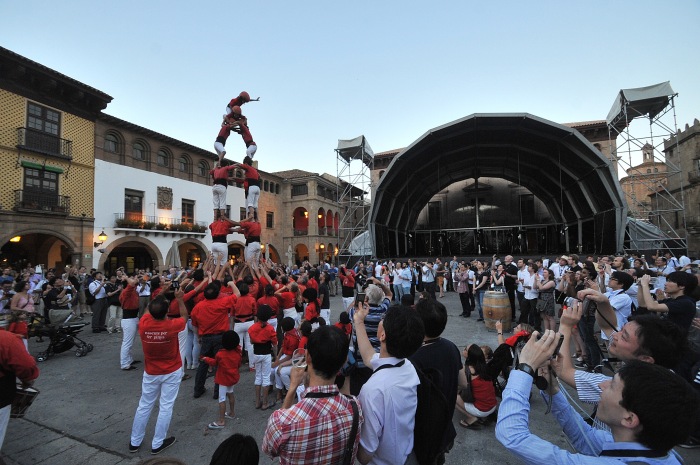 Did you attend ICM 2015? What did you think? The next event in three years time, ICM 2018, will be held in San Francisco, California. Will you be attending?