Weighty matters: Sigurd Hofmann on the heaviest of nuclei 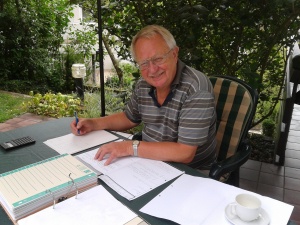 Sigurd Hofmann is one of the world’s leading experts in the physics of superheavy nuclei.

He has been part of the discovery of at least 7 superheavy elements, and has over a dozen prestigious awards to his name. He’s a superheavyweight in the field of superheavy nuclei, and his new article on the topic is part of JPhysG’s 40th anniversary collection.

We wanted to find out a bit more about his life and his research.

What research projects are you and your group currently working on?

I have to confess that I am retired since six years. The first three of these six years I was awarded with a Helmholtz Professorship which allowed me to continue the study of super-heavy nuclei (SHN) at GSI in Darmstadt. As a research program I suggested to study reactions using a target of the radioactive material 248Cm. The aim was the production of new elements beyond the already known element 118 which was first observed by our colleagues at the laboratory in Dubna, Russia, in 2003. After a generous gift of 20 mg of 248Cm as an unlimited loan from our American colleagues at the Livermore National Laboratory, we successfully repeated, as a test reaction, the production of element 116, also observed first in Dubna and now named livermorium after the name of the laboratory in California. As a beam we used the rare but most neutron rich stable  isotope of calcium with mass number 48. Some 39 researchers from Germany, USA, Russia, Japan, Finland, and Slovakia participated.

Then, in 2010, we were asking for 140 days of beam time to search for element 120 using a 54Cr beam and the 248Cm target. The first 34 days of the experiment was performed in 2011. We observed three correlated signals from which we determined energies in perfect agreement with the theoretically predicted alpha-decay energies of 299120 and 295118 and, for the third one, in agreement with the already known decay of 291Lv. For that decay the lifetime is also in agreement with the measured value. However, the lifetimes of the preceding two events are much longer than expected for unhindered alpha decays. On the other hand, the background at our main instrument, the velocity filter SHIP (separator for heavy-ion reaction products), is so low that the probability is 4×10-8 that the signals were created by chance.

Such a situation, when you are not completely sure if a measured result is correct, is well known to experimentalists. In such cases the only scientific solution is to continue with the experiment and try to confirm or disprove the first, uncertain result. Since 2011 we tried several times to get another beam time at the UNILAC, however, our proposals were rejected.

Due to the lack of beam time for continuing our search experiment, we decided to publish the result of the first part of the experiment as it was measured. Similar experiments in preparation at Dubna and at RIKEN in Japan will then decide about the correctness. In the meantime we studied existing data on even element SHN and tried to deduce information on calculated fission barriers and cross-sections. As a result we obtained that often-used fission barriers of a macroscopic-microscopic model are too high for SHN of the elements 114 and 116 and that the decrease of the barriers up to element 120 is less than predicted. As a consequence the cross-section for the production of element 120 could be higher than assumed so far. Therefore, it is very disappointing that we cannot continue our experiment at the GSI SHIP. But in any case, it is now the most exciting period of our research work.

What motivated you to pursue this field of research?

Actually, when I started my work in the group of Prof. Peter Armbruster after my thesis work in 1974, I had only a rough imagination of what will await me.

Some years before, the theoretician Vilen Strutinsky had published his macroscopic-microscopic method for calculation of nuclear binding energies. Using his method, calculations were published on stability of SHN and the yield for producing them. Experimentalists from the University of Giessen headed by Prof. Heinz Ewald suggested a heavy ion separator for studying SHN. The young people from Ewald’s institute, Gottfried Münzenberg, Klaus Güttner and Wolfgang Faust had the task to design and build this separator at the newly founded Gesellschaft für Schwereionenforschung (GSI) at Darmstadt with the new heavy ion accelerator UNILAC as the main research instrument. This group I joined in 1974. Later Karlheinz Schmidt and Willibrord Reisdorf followed. We started from scratch.

With the new separator SHIP (separator for heavy-ion reaction products), worldwide the first one of this type, and new detection methods, we were soon successful with the discovery of tens of new isotopes produced in fusion-evaporation reactions. In 1981, the first new element with atomic number 107, later named bohrium after Niels Bohr, followed. The last new element discovered at SHIP was copernicium, element 112, in 1996. This successful work became possible due to the continuous improvement of the accelerator, the separator and the detector system. Although the new elements were in the centre of interest, we also used the equipment for studying lighter nuclei and new phenomena, partly performed by young people doing their diploma or thesis work. Most exciting besides the identification of new elements was the discovery of proton emission of nuclei beyond the proton drip-line and the shape coexistence in light isotopes of lead.

In 1997, the construction of an ion trap was initiated as a new project for extending the applications of experiments at SHIP. Meanwhile, masses of isotopes of nobelium and lawrencium were measured with high precision. These experiments will be continued. The results on masses of nuclei at the end of alpha-decay chains will allow for determining the masses of SHN using the measured alpha energies.

One can easily see that this field of research comprises a broad range of physical phenomena and technical challenges. Almost in each irradiation we could obtain new results. Together with our colleagues from theory we tried to interpret the data. This way, step by step, we elaborated a rather good insight in the features that determine stability of SHN and the processes how they are produced.

Where do you think the field is heading?

The search for SHN pushed the sensitivity of experiments from detection of nuclei produced on a level of tens of nanobarns forty years ago to now 0.1 picobarns. Another increase of sensitivity by a factor of 10 will become possible in the near future. This high sensitivity will allow for production of new isotopes of SHN and possibly of the new elements 119 and 120. Another challenge for future experiments will be the study of both new neutron deficient and neutron rich nuclei. Of particular interest are the neutron rich SHN which are predicted to have the longest lifetimes when the closed neutron shell N = 184 is approached. Beams of radioactive neutron rich nuclei and quasi-fission reactions are the options for the future. The success of the first method will depend from the beam intensity that can be reached. The crucial point of the second method is the identification of the produced nuclei located on the neutron rich side, which will be beta emitters having relatively long lifetimes.

What interests you outside of science?

In a shelf near my bed I have a series of books on the history of mankind. It is fascinating to see part of the skull of ‘Lucy’ and to imagine what she might have thought walking across the steppe in East Africa. From her to us millions of years have passed and a hundred thousand generations. To learn about how mankind developed, how cultures grew and disappeared, and how they shaped their social life is a fascinating story and has moved me since school time. This subject, of course, is a science branch in itself. If I would not become a physicist, I most likely would be an archaeologist, searching for ancient artefacts and preventing them from being destroyed.

And finally, tell us an interesting fact about yourself.

I am a heavy sleeper and have difficulties waking up in the early morning. In almost no other profession than in science I could indulge this passion.