What is Condensed Matter Physics?

By Guest Blogger: Bristol and Bath CDT-CMP on December 2, 2015 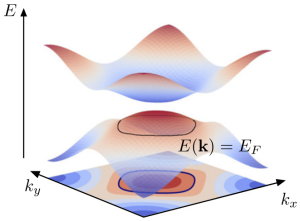 A seemingly simple question with an obvious answer – it is the physics of solids and liquids (condensed phases of matter). That includes the ground on which we are standing and the screen on which you are reading this blog. Perhaps because we spend most of our day interacting with condensed matter, there is a tendency to take it for granted. So why is condensed matter physics (CMP) interesting? I will ask the students and staff at the CDT why they chose to study CMP, and what is happening in CMP today that will be of interest to everyone.

Three is a crowd and other Many Body problems

It would indeed be remarkable if Nature fortified herself against further advances in knowledge behind the analytical difficulties of the many-body problem.
(Max Born, 1960)

At the heart of condensed matter physics is the necessity to understand how to deal with a system of many (more than three) interacting particles, for which exact calculations become impractical. The emergence of many-body effects gives rise to symmetry-breaking phase transitions into magnetic, charge or superconducting ordered states. These are the result of electron correlations – when each electron’s view of its surroundings is influenced by the presence of other electrons. To understand and to be able to manipulate such phenomena is the challenge facing condensed matter physicists. For example why are some elements superconducting and others not? This is not a trivial question, and just because CMP is concerned with the properties of real materials doesn’t mean that the physics is any less fundamental.

Prof. Stephen Hayden, Director of the CDT-CMP – There is fundamental physics [in CMP] that is relevant and applicable to many different areas. Indeed CMP is becoming an increasingly interdisciplinary and diverse subject.

Why do people want to study CMP?

Over the past 50 years few other areas of physics research have had such an impact on our daily lives. But what about the future? Advances in CMP could have many future applications from quantum information technology to the delivery of medicine in colloidal form. In terms of the number of PhDs awarded in U.S. physics departments, CMP is the largest sub-field of physics. For many, condensed matter provides the ideal laboratory for quantum mechanics and statistical physics – with the ability to engineer novel materials and nano-structures. What I like about CMP is that it doesn’t necessarily require much more than a table and a power supply in order to start experimenting.

I asked the first-year students in the Bristol-Bath CDT-CMP why they chose to study CMP, and the results are shown in the graph below. It would seem that it is not just the potential for technological applications that attracts students to CMP, it’s also the opportunity to understand real materials.

The frequency of answers given by the first-year CDT-CMP students when asked “Why do you study Condensed Matter Physics (CMP)?”. A single person could give multiple answers.

What are people studying in CMP?

CMP is not defined by a single problem: there are always new challenges with the ability to engineer new materials and new phenomena being discovered in existing materials. However the popularity of different research areas varies in time.

Prof. Stephen Hayden, Director of the CDT-CMP – It is exciting to be part of a large community of scientists all focussed on a new problem or class of material at the same time. 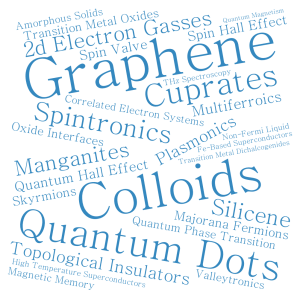 A word cloud representing the popularity of research topics. The font size is proportional to the number of all IOP journal articles published in the last three years which include that phrase in the title or abstract. (Word cloud graphic created using online platform Tagul.com).

It is not possible to provide an overview of all interesting research areas in CMP (there are far too many!). But in order to visualise the popularity of some of the more important topics I’ve created a word cloud. The font size is proportional to the number of all IOP journal articles published in the last three years which include that phrase in the title or abstract. It is clear that graphene and similar 2D materials have developed into fruitful areas of research. A relatively recent development in this field is an interest in the transition metal dichalcogenide (TMD) monolayers.

TMD monolayers are direct band-gap semiconductors with strong spin-orbit coupling in the conduction and valence bands that allow other degrees of freedom, such as spin, to be controlled with circularly polarised light. The ability to coherently manipulate the spin degree of freedom with electric and magnetic fields would allow the design of new solid-state devices that could use the spin, as well as the charge of electrons to store/transfer information – an area of research known as Spintronics.

Prof. Simon Bending, Deputy Director of CDT-CMP – More generally the role of spin-orbit interaction (and spin textures) is attracting a lot of interest in problems ranging from spin Hall effect to topological insulators.

We’ve seen that CMP is an interesting and varied field with a large community of researchers. Personally, I am excited to be embarking on a PhD in condensed matter physics, and my enthusiasm is shared by my colleagues in the Bristol-Bath CDT-CMP. An advantage of the Bristol-Bath CDT is that I am exposed to different research in the two departments. There is opportunity to get involved in most of the areas that appear in the word cloud – either in an experimental or theoretical capacity.