Journal club – thoughts on preparing for the presentation

Sweaty palms, dry mouth, tongue in a knot and a sudden mind freeze. These are only a few feelings that researchers may experience when delivering presentations, because sometimes there is nothing more challenging for them than grabbing the audience’s attention to showcase their work. In this context, Journal Clubs are an exceptional tool for us to practise wearing the shoes of a speaker. And for this reason, the CDT-CMP has chosen the Journal Club to represent a prominent part of our training.

But what exactly do we do in this Journal Club? Overall, we are given a selection of up-to-date papers. We select one of them, which we study thoroughly and prepare a presentation for our colleagues. The ultimate goal is to give a critical view of the paper, often reaching beyond just the bare physics, as the context, style and relevance of the results are also key elements to the discussion. All of this makes the task quite challenging, requiring not only a vast amount of background, but also a sense of maturity.  For the sake of clarity, this week I will give an example of how I would present the following paper: “Second-order quantum nonlinear optical processes in single graphene nanostructures and arrays” by Manzoni et al., published in the New Journal of Physics on August 2015.

Nonlinear effects have made graphene a candidate material for quantum processing devices. In this paper the authors claim to have found a way to observe two forbidden phenomena in graphene: second harmonic generation (SHG), a process where two photons of frequency ω are converted into one of frequency 2ω, and down-conversion (DC), which is the inverse process. This is possible thanks to the existence of surface plasmons (SPs) in graphene, which are excitations of the electron gas. And they claim that for some clever graphene structures there is a strong coupling between these excitations with frequencies ω and 2ω. Namely, they propose isosceles nano-triangles, and simulate the induced field when these are irradiated by a polarised electric plane wave. They go on to numerically calculate this coupling by the so-called parameter oscillation rate, which is proportional to the overlap integral between the field distributions of the two modes. In other words, this measures how “mixed” or “similar” the two excitations are.

A hexagonal array of triangular nanostructures illuminated by laser light at normal incidence and frequency.

However, this coupling strength is not enough to observe these effects experimentally, since SPs generally decay by non-radiative mechanisms in realistic structures. Therefore to enhance the coupling, the authors propose a hexagonal array of these triangular structures, boosting the conversion efficiency to 1%.

Finally, they take a quantum approach, studying the problem in the framework of the S-matrix formalism. They found that in realistic scenarios DC and SHG are not symmetric phenomena. This is because in a DC process, the outgoing photons are correlated whereas in SHG the incoming photons are not. They also spot the possibility for quantum blockade effects, a signature of the strong coupling observable in the lower mode. This is the reason why potentially these kinds of structures might enable one to attain the ultimate limit of classical non-linear optical devices: to realise strong interactions between single photons.

To begin with, this paper contains a lot of information, and it is quite hard to present all its nuances in 20 minutes. So I propose an easy way to transmit the essence of this paper, while keeping the audience’s attention: to structure the talk à la classique, with an exposition, confrontation and dénouement.

In this first part of the talk we should cover two basic questions: What is the aim of this paper? And what has been done before? Namely, we must explain what SHG and DC mean, the concept of SPs, and how they enable the coupling between the two frequencies of the incoming and outgoing photons. Hence, we have to think about an actual shape for the structure that will be holding those SPs. And here is where the nano-triangle, our main character, is introduced and where we highlight the importance of the 1.25% oscillation rate between the two modes.

So, what’s the problem?

When your intuition suggests there is some interesting physics to be discovered, you think of a possible experimental set up. However, in this case, the coupling between photons and SPs is extremely low. This issue, which is the evil character of our story, makes the efficiency of the nano-triangles drop off. Hence the array of nano-triangles must be presented as the solution we’re searching for. Consequently, we must explain the main changes in our Hamiltonian and show the most relevant graphs that support our solution. In other words, this is the results section.

Did they live happily ever after? 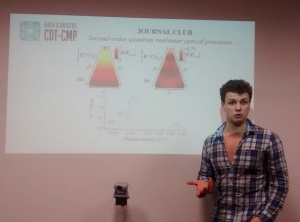 Finally, we have to justify why the authors are so happy with the 1% efficiency in quantum SHG, which is not so easy, as some classical commercial devices are able to reach an outstanding 80% efficiency. Therefore we have to emphasize the special nature of the outgoing light, and the quantum nature of the blockade effect. Here is also where we express all our thoughts. For instance, in this particular paper, there are some aspects that were taken for granted in the shape of the nano-triangles, such as their size, or their rounded edges. Why do these nano-triangles optimise the oscillation rate? Do they describe realistically achievable nano-structures made of graphene? Can experimentalists design such an array of structures? This is the most interesting part of the talk, directly establishing a connection between the speaker and their audience: this is the discussion section.

To conclude, Journal Clubs not only make us fight against stage fright, but make room for enriching discussions. And everything is motivated by your thoughts and especially your questions. Because a question is just a key to open the door of your understanding.

You can read the paper Aitor Garcia-Ruiz presented in his Journal Club and talks about in this post, here.

Like Loading...
‹ Image of the week: on the hunt for WIMPs
Welcome to the CDT-PV Guest Blog! ›