Home › Journal of Physics A: Mathematical and Theoretical › Imaginary crystals made real

Simone Taioli, a senior research scientist at the European Center for Theoretical Studies in Nuclear Physics and Related Areas explains to us the work behind his recent Letter in JPCM.

A unit sphere in the Euclidean three-space, next to two “hyperbolizations”. Only the second (the Beltrami pseudosphere) is a realization of Lobachevsky geometry. © 2016 IOP Publishing Ltd.

How does a black hole look like from the inside? If we were in there, with the objects of our everyday life, would we still recognize them? For instance, how would the beautiful symmetries of crystals and molecules that we know, be deformed? Could we still recognize some of their symmetries, and how would these remind us of the beauties of Alhambra, that are based on precise mathematical correspondences?

In our work we answer some of those questions in a simulation laboratory that does not require us to travel the scary one-way trip to a black hole. Indeed, by using both crystallographic group theory and computer simulations, we realize a discrete geometrical construction of the Lobachevsky type, hence we propose a novel graphene-based molecular structure.

The molecule is a Beltrami pseudosphere, the first and very important manifestation in the Euclidean three-space of Lobachevsky geometry. The symmetries of Beltrami are found here to be non-trivially related to those of a sphere, and they are an instance of Euclidean space in mysterious Lobachevsky crystallography.

This is, of course, only the beginning, since our approach could be followed for any of the infinitely many other members of this special family of surfaces, each in correspondence with a specific spacetime.

Instrumental for our findings has also been the solution of the generalized Thomson problem on surfaces of constant negative intrinsic curvature, for the large number of particles involved in our simulations. We recall that the original Thomson problem consists in finding the equilibrium configuration of N electrons constrained to move on the sphere (that is the surface of constant positive curvature).

Although not discussed in this paper, our results here are an important first step towards the realization with graphene of scenarios of quantum field physics on curved space-times, and of quantum gravity. Indeed, this new realistic molecular carbon structure, in a limit, corresponds to a tri-dimensional black-hole.

The full Letter is available to read now. 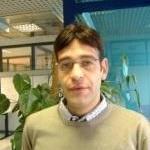 Simone Taioli is senior research scientist at the European Center for Theoretical Studies in Nuclear Physics and Related Areas (ECT*, Trento- Italy) and in the Faculty of Mathematics and Physics at Charles University in Prague. He graduated in Nuclear Engineering at the University of Bologna (2000) and holds two PhDs, the first in Nuclear Engineering (Bologna, 2004) for developing a theoretical method to simulate electron spectra from molecules and solids and a second in Theoretical Physics (University of Trento, 2013), where he developed interest in the nucleosynthesis of elements in stars. He worked as post-doctoral research fellow at UCL (UK) and at the University of Sheffield, dealing with the ab-initio calculation of electronic, optical and thermodynamic properties of materials, notably graphene.

Stefano Simonucci is senior research scientist at the University of Camerino (Italy) in the Faculty of Mathematics and Physics. He graduated in Physics at Scuola Normale Superiore (Pisa, 1984) where he also pursued his PhD in molecular sciences (1994) defending a thesis on the study of electronic properties of molecules in their interaction with external fields. His current research interests concern both the development of theoretical and computational many-body approaches for the study of ultra-cold Fermi gases at unitarity via the numerical solution of the Bogoliubov-De Gennes equations, and the ab-initio simulation of the decay of excited systems via the solution of the Lippmann-Schwinger equations including interchannel interaction. 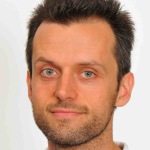 Ruggero Gabbrielli, a visiting researcher at the Faculty of Mathematics and Physics of Charles University in Prague, gained a degree from Florence University, Italy (2003), and a PhD from Bath University, England (2009), both in Mechanical Engineering. Previously, he was a Marie Curie research fellow at Trento University, Italy. His current research interests concern cell aggregates ad soap films, the Kelvin problem, periodic tiling from points sets and n-dimensional honeycombs.

Nicola Pugno is Professor of Solid and Structural Mechanics at the University of Trento, Italy and Professor of Materials Science at Queen Mary University of London. He is currently leading the Laboratory of Bio-Inspired & Graphene Nanomechanics and acting as a Scientific Responsible for the Graphene Nanocomposites division founded by EU graphene flagship at the Bruno Kessler Foundation. Furthermore, he is a Member of the Scientific and Technical Committee of the Italian Space Agency. Prof. Pugno holds two master degrees in engineering and physics, and two doctoral degrees in engineering and biology.

Alfredo Iorio is Associate Professor of Theoretical Physics at the Faculty of Mathematics and Physics of Charles University in Prague. He graduated in Physics at Salerno University, Italy (1994), obtained his PhD from the School of Mathematics of Trinity College Dublin, Ireland (2000). Before joining the faculty of Charles University (2006), he was the postdoctoral “Bruno Rossi” scholar at the Center for Theoretical Physics of MIT, Boston, USA (2003-2005). He has worked for many years on supersymmetry, noncommutative spacetimes and black hole physics, from the theoretical perspective. From 2010 he has focused his research activity on the challenge to test such fundamental theories on corresponding low-energy systems. This lead to his proposal of graphene as an important and versatile corresponding system to test quantum physics of curved spacetimes, and quantum gravity.

This work is licensed under a Creative Commons Attribution 3.0 Unported License. Images from Simone Taioli et al 2016 J. Phys.: Condens. Matter 28 13LT01. © 2016 IOP Publishing Ltd. The photos were provided by the authors themselves.

Like Loading...
‹ Inactivation of viruses with cold plasma technologies
Evolving images of the proton: hadron physics over the past 40 years ›