Home › Journal of Physics: Condensed Matter › Adventures in the Netherlands

Adventures in the Netherlands

I struggled for breath as my body was in free fall. Some people apparently hate this feeling when a plane descends. I loved it. It almost felt like the thrill of a roller coaster, and I was a kid again wishing it would take yet another dive. This plane was about to land in the Netherlands. For my CDT placement, I was going to do research there for six weeks with my project partner, Emma.

It was a quiet January night when we arrived in Nijmegen, a city near the Netherlands–Germany border. Our supervisor, Alix, welcomed us and showed the way to our apartment. She had a calm and thoughtful demeanour, just as I remembered over Skype when she briefed us on the project.

Emma and I were going to test a thermometer for use at temperatures below –200 °C. Weird things happen when stuff is this cold, one example being superfluidity. Traditional thermometers measure expansion and contraction of mercury in a glass tube, whereas digital thermometers measure changes in electrical resistance across metals like platinum. Both types, classed as secondary thermometers, can be a problem for researchers: at low temperatures, they lose calibration. That’s why for our project, we were to test a primary thermometer which doesn’t need calibration. The catch? It takes over ten minutes for a single temperature measurement. This involves software plotting a conductance–voltage curve whose full width at half maximum is directly proportional to temperature via known constants. Despite long measurement times, primary thermometers are worthwhile for researchers needing reliable results in low-temperature physics.

View from the 7th floor of our guesthouse apartment in Nijmegen, Netherlands. We worked in the High-Field Magnet Laboratory (HFML) seen on the right with curved architecture.

When we reached our apartment, the lab where we’d be working was close enough to be seen out the window. How convenient. It took only a few minutes to walk there, but it felt like going through a freezer. The sharp difference in temperature between well-heated buildings and outside made even Alix grumble.

The lab itself was the High-Field Magnet Laboratory (HFML) where magnetic fields up to 37.5 Tesla can be reached; for comparison, a fridge magnet has a strength of 0.005 Tesla. Magnetic fields are often used in low-temperature experiments to reveal more information about samples like a magnifying glass. The downside is that magnetic fields affect thermometers so they need to be monitored and accounted for when calculating temperature. It turns out that unlike other primary thermometers, the specific type we were to test—a Coulomb blockade thermometer—was expected to be independent of magnetic fields. Confirming this would be useful for researchers in the HFML.

Bikes parked outside Nijmegen train station. There are more levels below ground, and this is a typical sight in the Netherlands. © Dewan Chowdhury.

Cycling is the norm in the Netherlands, so we borrowed bikes to explore Nijmegen. The trouble was that I hadn’t ridden a bike for over a decade. It had been many years for Emma, too. Unsurprisingly, we had a rough start when riding again. Emma fell and scraped her knee. If she felt embarrassed, that soon disappeared with what happened to me in the hours ahead.

While crossing the road, I almost got run over by cars. It was my fault, though. I was so focused on trying to ride in a straight line that I forgot traffic goes in the opposite direction here. And yes, I should have looked both ways, but learning to ride a bike again in foreign land threw me off big time. Along not-so-straight lines, we continued onwards to the city centre. “We came all this way to another country and the first store we go into is Primark?” I saw the irony that Emma was referring to, but we needed towels and knew Primark would sell them. After exploring the city centre, we returned to our bikes parked beside an overflowing bike rack. I managed to topple over an entire row. The bikes fell like dominoes. Paralysed to react, I could only watch, but onlookers generously helped me pick them up afterwards. At least on our ride back to the apartment, I finally saw someone looking shaky with eyes down on her front wheel.

“Emma, look, someone else is learning to ride too!”
“Aye, but she’s half our age.” 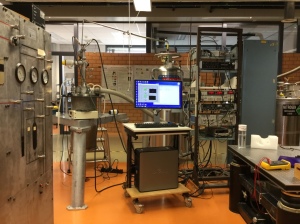 Cylindrical cryostat supported by a triangular structure and attached to a liquid helium vessel. Cables connected the thermometer to a computer where temperature measurements can be read. © Dewan Chowdhury.

Back in the HFML, reaching low temperatures for our thermometer involved putting it in a cryostat. This was a freezer cooled by liquid nitrogen and liquid helium. We glued the thermometer onto a 2 m long metal rod—a probe—to be placed inside the cryostat, and then soldered wiring to connect the thermometer to a computer where measurements can be read. Emma and I did our best to get it all working, but we would later find that this wasn’t enough.

On one weekend, we crossed the border to the German city of Düsseldorf. It was like little Japan, so we went to Okinii, an all-we-can-eat Japanese restaurant. Emma showed me how to use chopsticks, but I could have downed more food if I had practice beforehand. We also had drinks at a restaurant 170 m high in the Rhine Tower. Seeing Düsseldorf from up there was most memorable, even if Emma hadn’t shattered her glass by accidentally pushing it off the table. When evening settled, we stopped by a street drummer called Oded Kafri. As an introvert, I find it difficult to connect with others, yet here was a person who used music and theatrics to connect with and entertain the crowd. I was inspired.

Rhine Tower (Rheinturm) is the tallest building in Düsseldorf, Germany. It’s 240.5 m high with an observation deck and restaurant at 170 m. © Dewan Chowdhury.

“All hopes and dreams have been shattered”, Emma wrote in her lab book. Dramatic, but it’s how we felt when seeing a dozen wires had snapped from disconnecting our stubborn probe. It wasn’t the first nor last time that snapping wires stopped our progress. Experimental physics was showing us no mercy. Eventually, with practice and patience, snapping wires no longer troubled us. However, the software didn’t plot conductance–voltage curves correctly but instead gave scattered data points. This lasted for weeks. Having ruled out experimental errors, we could only conclude that there was something broken inside the thermometer. Alix’s plan was to contact the manufacturer for assistance and possibly get a replacement, but we wouldn’t be around to see the conclusion. Our time in the Netherlands had come to an end. Hopefully, Alix doesn’t have as much trouble when working on the thermometer herself.

It seems that progress can make the difference between a frustrating project and a fulfilling one. Although our project was the former, Alix was sympathetic and reassured us that these things happen. Sometimes, things are beyond our control. We may not have achieved much research-wise, but that doesn’t mean the CDT placement wasn’t worthwhile. Far from it.