Home › Journal of Physics G: Nuclear and Particle Physics › Stabilization of 8Be in plasma

Stabilization of 8Be in plasma

In their new Letter in JPhysG, researchers Xiaojun Yao, Thomas Mehen and Berndt Müller from Duke University in the USA study the resonant state 8Be. In this post lead author Yao explains what the work is about.

The nucleus 8Be is known to be a resonant state in two α particle (4He) low-energy scattering experiments. The resonance lies at the energy of E0 = 91.8 keV, i.e., when the two incoming α particles have a total kinetic energy of 91.8 keV in the center-of-mass frame, they can form the resonant state. The lifetime of 8Be is Γ0-1= 1.2 x 10-16 s, with the resonance energy and lifetime determined by two competing factors: the short-range nuclear attraction and the long-range Coulomb repulsion. The interplay of these two factors in a vacuum leads to the resonance with the above properties.

What would happen if the particles are put into a plasma – a sea of charged particles, say electrons and positrons? The positively charged particle will attract electrons and repel positrons. As a result, a cloud of particles is formed with a net negative charge around the α particle. When observed from far away, the Coulomb potential generated by the particle is decreased by an exponential factor of e-mDr where mD is the Debye mass of the plasma, which depends on the plasma temperature. This phenomenon is called the static screening.

So how does the plasma static screening effect change the resonance properties – energy and lifetime? Our research tries to answer this question. Intuition suggests that the effect should be most prominent with a plasma temperature around the resonance energy. If the Coulomb repulsion is screened, the potential energy and thus the total energy (as the eigenvalue of the Hamiltonian) of the two-α system will decrease. So the resonance energy will decrease in the plasma. In addition, if the net tunnelling barrier (the Coulomb potential minus the eigenenergy) increases (which means on average the eigenenergy drops more than the Coulomb potential does due to the static screening), the lifetime will increase.

Resonance energy and the width as a function of the Debye mass in the plasma. Copyright IOP Publishing.

Our explicit calculation using the effective field theory and thermal field theory confirms both of these expectations, as shown in the figures. If the Debye mass is large enough, the eigenenergy turns negative, which indicates that the 8Be becomes a bound state (stable) rather than a resonance (unstable due to the decay to two α particles). We speculate that this effect may have implications on the rates of cosmologically and astrophysically relevant nuclear reactions involving α particles.

An effective field theory approach to the stabilization of 8Be in a QED plasma
Xiaojun Yao et al 2016 J. Phys. G: Nucl. Part. Phys. 43 07LT02
Find out more about letters in JPhysG 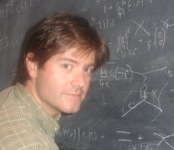 We belong to the nuclear and particle physics theory group in the Department of Physics at Duke University. Thomas Mehen (left) and Berndt Mueller (middle) are faculty members, while Xiaojun Yao (right) is a third year graduate student .

Photos supplied and used with permission from Xiaojun Yao.