Philomena Schlexer and Professor Gianfranco Pacchioni of the University of Milano-Bicocca discuss their recent work published in Journal of Physics: Condensed Matter special issue on chemical functionalities at oxide interfaces, in which they theoretically investigate a novel 2D material. Read the full article here. 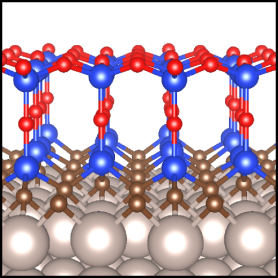 Thin-films play an important role in many technological applications such as micro/nano-electro-mechanical systems (MEMS/NEMS), catalysis and bio-sensing. They exhibit surprising new properties compared to their bulk counterparts. The most famous example is graphene, consisting of only one atomic layer of carbon. For many other materials, for example BN, MoS2 and SiO2, it is possible to produce films only a few atomic layers thick. These ultra-thin films are also called two-dimensional materials. Monolayers and bilayers of corner-sharing [SiO4] tetrahedra can be synthesized on metal supports, such as on Ru and Mo. The bilayer version exhibits a porous hexagonal structure, as shown in figure 2 (a). Due to its topological resemblance of graphene, the monolayer is termed silicatene and the bilayer termed bilayer-silicatene. However, in contrast to graphene, bilayer-silicatene is permeable for small molecules, such as H2, D2 and CO. This is an intriguing property, because it opens up the possibility of performing reactions on the metal substrate underneath the film. 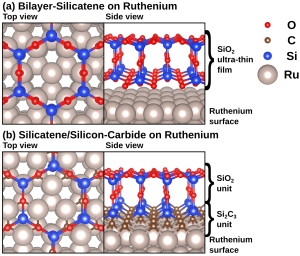 Recently, a well-ordered silicatene/silicon-carbide hybrid thin-film supported on Ru was reported. In our work, we modeled this system using density functional theory. The new thin-film consist of a monolayer of corner sharing [SiO4]-tetrahedra on top of a [Si2C3] monolayer supported on the Ru surface, as shown in figure 2 (b). The silicatene/silicon-carbide film differs from bilayer-silicatene in that the lowest oxygen atoms of the bilayer-silicatene are substituted by carbon atoms. Ultra-thin films belong to the class of nano-materials, which exhibit a thickness in the nanometer range in at least one of the three spatial dimensions. Typically for these materials, small structural changes bring about completely different properties. To learn more about the properties of this novel thin-film, read the full article here.

Philomena Schlexer is a PhD student in Material Science and Nanotechnology at the University of Milano-Bicocca and holds a position as Early Stage Researcher in the European FP7 programme “CATSENSE”. She received the M.Sc. degree in Chemistry at the Free University of Berlin. Philomena Schlexer is co-author of 9 articles and has been visiting scientist at DTU (Denmark), KU Leuven (Belgium) and HU-Berlin (Germany).

Gianfranco Pacchioni is Vice-Rector for Research and Full Professor of Solid State Chemistry at the University of Milano-Bicocca. His main interests are theory and electronic structure of oxides (bulk, surface, thin films, nanostructures), supported metal clusters, materials for catalysis, photocatalysis and energy production. Gianfranco Pacchioni has received various awards including the Nasini Medal of the Italian Chemical Society (1994), the National Price “Federchimica” (1996), the Alexander von Humboldt Award (2005) and the Blaise Pascal medal (2016). He is Fellow of the Accademia Nazionale dei Lincei (2014), the Academia Europaea (2012), and the European Academy of Sciences (2009).