The CRESST experiment: an interview with dark matter hunters 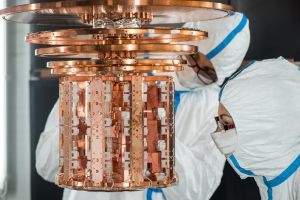 The CRESST detectors mounted inside the cryostat. Copyright A. Eckert/MPP.

The hunt for dark matter and the search for very rare nuclear decays have very similar requirements. Today we talk to Dr Florian Reindl (Max-Planck-Institut für Physik) and Dr Moritz v. Sivers (University of Bern) about the CRESST experiment after the collaboration’s recent paper in JPhysG.

Oh, and CRESST stands for ‘Cryogenic Rare Event Search with Superconducting Thermometers’‘. I can see why they use the acronym.

Read the paper: New limits on double electron capture of 40Ca and 180W.

What are double beta processes and why are they important?

Moritz: Double beta processes are very rare nuclear decays. Currently, there are many experiments studying double beta decays, where two neutrons in an atomic nucleus decay into two protons and two electrons. What we searched for is the inverse process: double electron capture, with two protons capturing two electrons from the atomic shell thereby transforming into neutrons. In principle, there are two possible modes for these decays: In the first one also two (anti)neutrinos are emitted while the second one would be a neutrinoless mode. The latter process is forbidden in the Standard Model of particle physics and studying it, therefore, has consequences upon the fundamental concepts of nuclear and particle physics. It will help to answer questions about the nature of neutrinos, e.g. if neutrinos are their own antiparticles and what are their masses. It can also help to solve the puzzle of why there is more matter than antimatter in the Universe.

Where do you think the field is heading?

Moritz: In general, ‘classical’ searches for double beta decay are more promising because the theoretically predicted half-lives are lower. However, in the past few years more and more people became interested in also studying double electron capture. I think that in the next decade we will see a lot of new experiments employing new techniques like coincidence detection. This can make the double electron capture search an interesting alternative to the double beta decay experiments.

Tell us about CRESST; what’s the current status and what are its goals?

Moritz: Actually, our search for double electron capture was only a byproduct, the main focus of CRESST is to find dark matter. From astronomical observations we know that dark matter exists, however, we have no clue what it is made of. The basic idea of CRESST is to search for interactions of dark matter particles with ordinary matter. Technically this is done by equipping CaWO4 crystals with extremely sensitive thermometers. These thermometers then measure the temperature rise induced by a particle interaction in the crystal. Since the CaWO4 crystals in CRESST contain several isotopes that can potentially decay via double electron capture we can try to detect them. In this case the crystals serve simultaneously as detector and source. Experimentally, the searches for dark matter and double beta processes have very similar requirements since in both cases you have to build a detector that can be used to look for very rare interactions.

Florian: Just now the CRESST experiment is starting a new measurement campaign featuring new dedicated detectors optimized to detect very small energy depositions. A low energy threshold is a crucial aspect in the field of direct dark matter detection as the dark matter particles are not only expected to interact very rarely with ordinary matter, but also to transfer only little energy in such interactions. The situation gets even worse for light dark matter particles: without a low threshold one will not be able to see any signal. Already in the last measurement campaign (July 2013 – August 2015) we could achieve a very low  threshold of about 300 eV, thus CRESST currently has world-leading sensitivity for very light dark matter particles. At the moment of this interview we are setting up new detectors optimized for the measurement of small energy depositions. The main measure was to reduce the size of the target crystal. First performance estimates show that these detectors could push the threshold down by at least another factor of three, well below 100 eV. I think exciting times are ahead of us with new CRESST results on low mass dark matter to be expected in 2017.

Why does CRESST need to be so sensitive, and what are the difficulties in achieving this?

Moritz: As already mentioned both dark matter interactions and double electron capture decays are expected to occur very rarely. For some of the processes we were looking for the theoretically predicted half-lives are about 1033 years. If you compare that to the age of the universe which is ‘only’ about 1010 years you can get a feeling how incredibly rare this really is. It is therefore important to reduce the background in the experiment, e.g. from natural radioactivity and cosmic radiation, as much as possible. CRESST is located in the Gran Sasso underground laboratory in Italy which is situated next to a highway tunnel in the Abruzzo mountains and therefore well shielded from cosmic rays by about 1400 meters of rock overhead. To reduce the background from external radioactivity we placed thick layers of lead and copper around our detectors. But also our detectors themselves need to be free from any radioactive contamination. For the new detectors CRESST now uses crystals which underwent a newly developed chemical purification process.

Florian: As I already pointed out, for the dark matter search the high sensitivity (low threshold) is needed to detect interactions induced by very light dark matter particles. However, also background is a crucial aspect of any rare event search. Apart from the main measures already explained by Moritz we introduced another novelty for the new detectors: We also equipped the sticks holding the target crystals with a separate thermometer, then called iSticks (instrumented sticks). With the help of the iSticks we are now able to exactly locate where the interaction took place in the detector further reducing the number of background signals induced by particle interactions outside the main crystal.

What would a detection signal [at CRESST] mean for physics, and what would be the next steps?

Moritz: When searching for double beta processes the most significant implications would come from the discovery of a decay without the emission of neutrinos. This would show that neutrinos are their own antiparticles and provide definitive evidence of physics beyond the current Standard Model of particle physics. Of course any potential signal would have to be confirmed by other experiments. After that we would have to try to find out more about the new mechanism we discovered, e.g. if it points towards the existence of new particles that can be searched for at accelerator experiments.

Florian: A positive dark matter signal in CRESST or in any other direct dark matter search would of course also be extremely interesting and exciting. That is, because we all seek to solve the riddle of dark matter, which is an open question of modern physics since more than 80 years. In addition, such a signal would also open a new world beyond the Standard Model of particle physics. This would open a new era of particle physics and thus, a positive signal would be of great interest not only for people working on dark matter, but for every particle physicist. Typically there are three steps for a positive detection signal: claim, confirmation and characterization. So, the first step after a signal claim would be independent crosschecks by other experiments. After that, we (physicists working in the field of dark matter detection) would try to learn as much as possible about dark matter by combining different experiments and if possible also by comparing to indirect dark matter searches and to dark matter searches at colliders, in particular at the LHC. So naively one would expect that the work is done once dark matter is discovered, but in fact it would just really start then.

And finally, what is your motivation for your research and what advice can you give to budding scientists?

Moritz: I enjoy working in fundamental research like the search for dark matter or double beta experiments because there is the chance to make a new discovery that influences our fundamental understanding of how the Universe works. Usually, these experiments are realized within large collaborations and as a PhD student or PostDoc it is not always easy to gain visibility inside the collaboration. My advice to other students is to be proactive, discuss with other colleagues and keep your eyes open for interesting side topics.

Florian: I completely agree with Moritz. Working in fundamental research gives you the possibility to discover completely new things and add another piece to the understanding of nature. Something I really appreciate about our job is that one has a lot of freedom to develop and follow your own ideas. However, it is your own responsibility to use this freedom and make the best out of it. So my advice would be to start from the beginning of your scientific career to walk the sometimes bumpier path, instead of just following the paved road.

More from JPhys+
Laura Baudis: the detection of dark matter and XENON
Do solar neutrinos impact light dark matter searches?
Is there dark matter in our neighbourhood?
Image of the week: on the hunt for WIMPs

Figure: Copyright A. Eckert/MPP. Used with permission; and not licensed as CC-BY.

Like Loading...
‹ Adsorption and protonation of peptides and proteins in pH responsive gels
Image of the week: nuclear processes in the universe ›