Journal of Physics: Condensed Matter (JPCM) has invited some of the best early-career researchers in condensed matter physics to contribute to a special issue. Called ‘Emerging Leaders’, this special issue will be part of the Journal of Physics (JPhys) series’ 50th anniversary celebrations in 2017, recognising the talents of exceptional, upcoming researchers. In the recent invited paper, Ying Jiang and his team shed new light on the NaCl dissolution at low temperature with a scanning tunneling microscope (STM). Read on to find out more in the author’s own words:

NaCl dissolution at ambient temperature has been widely investigated, revealing that the NaCl dissolution starts from the sites of least coordination such as the corner sites or the edge sites of NaCl surfaces. It has been inferred that the Cl– prefers to dissolve prior to Na+. Considering the abundance of ice-coated NaCl aerosol particles under atmospheric conditions, it is also very important to understand NaCl dissolution below freezing point and check whether the above picture of NaCl dissolution is still valid at low temperature.

In our recent article in Journal of Physics: Condensed Matter [1], we report the real-space observation of the dissolution of Au-supported NaCl islands by water with atomic precision using low-temperature STM. We find that the detachment of a single Na+ is greatly facilitated by a single water molecule on the STM tip even at 5 K, while the Cl– sites remain intact. When covered with a full water monolayer, the NaCl (001) bilayer islands start to dissolve from the step edges and also show evidence of dissolution inside the terraces as the temperature is raised to 145 K. At 155 K, the water molecule completely desorbs from the surface, which was accompanies the decomposition and restructuring of bilayer NaCl islands. 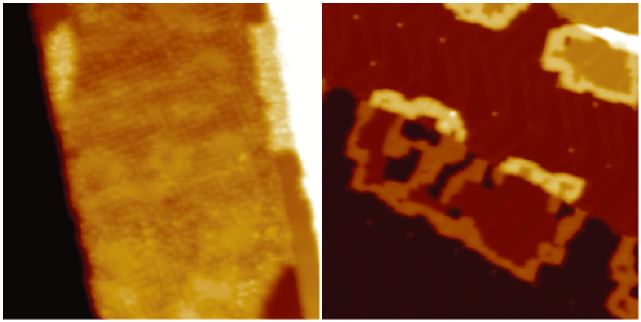 Left: a NaCl island being dissolved by the water, showing some cloud-like features. Right: dissolved NaCl island with some reconstructions. © Ying Jiang 2017. All rights reserved.

Currently, our group is developing state-of-art scanning tunneling microscopy/spectroscopy, which allows access to the quantum degree of freedom of protons with atomic precision [3,4]. Combined with ab initio path integral molecular dynamics (PIMD) simulations, we have made groundbreaking steps towards understanding the nuclear quantum effects of water/ice [4,5]. Those findings may revolutionise our understanding of water/ice and provide explanations for the many strange properties of water/ice from a quantum mechanical viewpoint.

Jinbo Peng and Runze Ma are PhD students in School of Physics at Peking University. Their researches focus on the investigation of atomic structures and dynamics of water and hydrates with combined STM and AFM.

Jing Guo is a postdoc researcher in School of Physics at Peking University where she also got her PhD degree under the supervision of Professor Ying Jiang. Her research is the investigation of nuclear quantum effects of interfacial water at atomic scale with combined STM and AFM.

Xiangzhi Meng is a postdoc researcher at the University of Münster in the group of Professor Harald Fuchs. He got his PhD degree in the School of Physics at Peking University, where he worked on the atomic-scale ultrafast dynamics of water and TiO2 with a laser-assisted STM.

Ying Jiang is a tenured associate professor in School of Physics at Peking University. His team is currently interested in the development of advanced scanning probe microscopy and spectroscopy, and the ultrasensitive detection of novel quantum states in single molecules and two-dimensional materials.