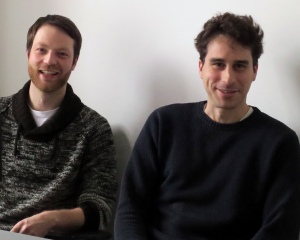 Journal of Physics: Condensed Matter (JPCM) has invited some of the best early-career researchers in condensed matter physics to contribute to a special issue. Called ‘Emerging Leaders’, this special issue will be part of the Journal of Physics (JPhys) series’ 50th anniversary celebrations in 2017, recognising the talents of exceptional, upcoming researchers. In a recent invited paper,   Daniel de las Heras and Thomas Geigenfeind investigate the stacking of colloidal mixtures. Find out more from the authors below:

Sedimentation is a primary experimental tool with which to study phase behaviour in colloidal systems. In sedimentation-diffusion-equilibrium experiments, a sample is left to settle under gravity until the equilibrium between thermal motion, buoyancy forces, and internal forces is achieved. Very complex sequences of stacks of different thermodynamic phases might occur as a result of this force balance.

It is well known that the concentration and the composition of a colloidal mixture are crucial parameters that greatly influence the resulting stacking sequence. However, the role of the sample-height in colloidal sedimentation has received very little attention in the scientific literature.

Figure caption: Two samples of a colloidal mixture in sedimentation-diffusion-equilibrium for which the only difference is the sample height might develop completely different stacking sequences. © Daniel de la Heras 2017.

Our theory is general and can be applied to any colloidal mixture. As a particular example, we study sedimentation in mixtures of colloidal particles with interaction sites on their surface, such that two colloids can form reversible bonds. The resulting stacking diagrams are extremely rich despite the relatively simple bulk behavior of the mixture.

Thomas Geigenfeind is a PhD candidate at the University of Bayreuth. The focus of his studies is the theoretical description of colloidal sedimentation.