Could directed pharmacological treatments of the cell skeleton alter cell membrane function? In their recent Journal of Physics D: Applied Physics article, published as part of our Emerging Leaders special issue Professor Marco Fritzsche et al. used super resolution microscopy to investigate. Read on to find out more in the authors’ own words.

In the last few decades, a myriad of biological research has indicated how the architecture, mechanics, and function of the outer barrier of cells – the plasma membrane – is influenced by the dynamics of the underlying cellular skeleton. The most dynamic component of this skeleton, the cortical actin cytoskeleton, is the primary target of biophysical research, since it is located directly underneath the membrane of cells. 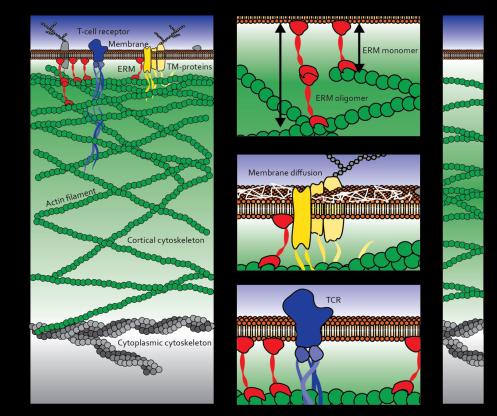 Despite its apparent importance, the exact distance between these two structures could only be estimated because of a fundamental limitation of fluorescence microscopy, known as the diffraction-limit. This physical barrier means that objects spatially separated by less than ~200 nm – half of the size of the applied fluorescence wave-length – cannot be accurately distinguished from one another. Historically, this experimental restriction precluded biologists from quantifying the thickness of the thin cortical actin network and, critically, its distance from the membrane, approximated to be ~200 nm and < 10 nm respectively.

Employing super-resolution microscopy allows us to overcome this physical resolution limit and accurately measure, at unprecedented detail and resolution, the distribution of cortical actin as well as the distance between the actin cytoskeleton and the membrane in living Jurkat T-cells. Consistent with theoretical considerations, we found a non-symmetric distribution of cortical actin underneath the membrane. Surprisingly, we also found that in some regions the cortical actin was closer than 10 nm to the membrane and a maximum of 20 nm in others. This suggests that the nanoscale distance between actin and membrane is not constant throughout the cell and may thus locally affect the membrane architecture, mechanics, and function.

These findings are profoundly important for the understanding of human health and disease. This is particularly relevant in the field of immunology, where responses of the immune systems to pathological threats such a bacterial and viral diseases rely on functional communications between immune cells through specialised ligands in their membranes. Our study provides empirical data of how the cortical actin cytoskeleton could influence the cell membrane. To this end, directed pharmacological treatments of the cortical actin cytoskeleton may enable researchers to control membrane function. Using super-resolution microscopy for basic biological questions is becoming a general approach and can be applied to most living cell types. 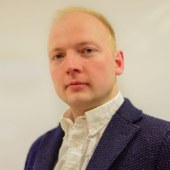 Marco Fritzsche is a Principal Investigator in the Medical Research Council’s Human Immunology Unit at the Weatherall Institute for Molecular Medicine and the Kennedy Institute at the University of Oxford, United Kingdom. He obtained his PhD in physics at University College London in the UK in 2013 and pursued his Postdoctoral training a the University of Oxford, and at the Howard Hughes Medical Institute Janelia Farm in the USA, 2016. His research focuses on the biophysics of the immune system in health and disease.

Huw Colin-York is a Postdoctoral researcher in the Fritzsche lab