Is KDP a model order-disorder lattice without any displacive component? 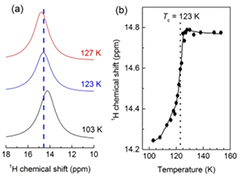 Figure (a) 31P MAS spectra of KDP at 243 MHz recorded around Tc. (b) Temperature dependence of 31P isotropic chemical shift.

The aforementioned NMR method of probing the nature of a phase transition was utilized for KDP some three decades ago, and within a large experimental error, no change was detected in the isotropic chemical shift of the P-31 nuclei, leading to the conclusion that the KDP transition is indeed a model order-disorder type. This result has thus been considered as a definitive evidence for showing the KDP-type materials being model order-disorder systems. However, recent advances in the resolution of the NMR technique for solids, namely the magic-angle-spinning (MAS), have opened a new door for answering such queries.  In the current study, Dalal, Fu and coworkers used variable temperature MAS NMR measurements on 1H and 31P nuclei in KDP in the vicinity of its paraelectric-ferroelectric phase transition temperature, Tc, of 123 K. It is shown that the δiso for both 31P and 1H nuclei in KDP show clear anomalies as a function of temperature around KDP’s Tc, see the adjoining figure, providing direct evidence of a displacive component in KDP’s phase transition mechanism. These results strongly suggest that this phase transition should be characterized as a mixed order-disorder and displacive type, in contrast to the generally accepted notion that KDP is a model order-disorder lattice.

The present work has broader significance in the phase transition field. At the NMR timescale (millisecond to sub-picosecond), the atomic fluctuations underlying the ferroelectric transitions in the hydrogen-bonded ferroelectrics, usually considered as model order-disorder systems, and the inorganic BaTiO3-type perovskites, usually thought of as model displacive materials, exhibit both order-disorder and displacive characteristics, rather than purely one or the other.