Home › Journal of Physics A: Mathematical and Theoretical › Celebrating 50 years of the JPhys series

Celebrating 50 years of the JPhys series

Here at JPhys+ we are proud to be celebrating 50 years of the Journal of Physics series.

An excellent history of the formation of the Institute of Physics and the JPhys series is given in an Editorial by Professor Sir John Enderby.  In addition to the history, John presents some facts about the series which I thought it was worth reproducing below:

Over the last half a century more than 40 Nobel Prize winners have published with JPhys titles and to date the series has published nearly 150 000 articles (amounting now to more than 3000 articles per year). In a reflection of its enduring relevance across physics, in 2016 alone content in the series was downloaded more than 4.1 million times across over 200 countries, and cited over 110 000 times—this means that someone, somewhere in the world is downloading a JPhys article every 7.5 s!

The 50th anniversary has given us chance to reflect on the series and take a closer look at some of the work published in it.  We have compiled a Viewpoints collection presenting 50 of the most influential articles published across the JPhys series, accompanied by commentary pieces, written by the authors of the original articles and other experts in the field.

A milestone such as this also provides an opportunity to look to the future.  Each JPhys title has run an Emerging Leaders/Emerging Talents special issue featuring invited research papers from early career researchers identified by the Editorial Boards as ‘rising stars’ in their fields.  Find out more about our Emerging Leaders in some of our recent JPhys+ interviews and news items. 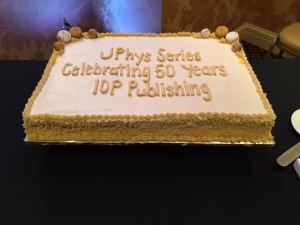 Our celebratory cake at the IOP reception, New Orleans

We’ve also been celebrating with authors, referees and readers at various locations across the globe.  Earlier this month at the APS March meeting in New Orleans, IOP Publishing held its annual reception – a much talked about event in the condensed matter community.  This year we were lucky enough to receive a talk from John Enderby about the history of the JPhys series, and the contributions to science made by authors publishing with us.  And of course, no birthday party would be complete without a cake.

The 50th anniversary celebrations actually began in November 2016 with a workshop for young researchers held in Beijing.  Leading researchers in their respective fields gave talks about their work.  February saw a similar event take place in Tokyo.  Keep a look out on JPhys+ for future posts on the anniversary.  (Previous blog posts can be found here.)

Here’s to the next 50 years of JPhys!

Like Loading...
‹ Insights from Emerging Leaders: Hexagonal ferrites get a matched substrate
Constructing a crystal structure prototype database and its applications ›