Home › Journal of Physics B: Atomic, Molecular and Optical Physics › Work hard and pursue your dreams: An interview with Jesús Pérez Ríos

Work hard and pursue your dreams: An interview with Jesús Pérez Ríos

We get some inspiration after speaking with Dr Jesús Pérez Ríos, member of Professor Chris H. Greene’s group (Purdue University), about his research and hearing his overview of the field of AMO physics.

Q : What research projects are you and your group currently working on?

In our group we are interested in the development of novel theoretical approaches to the study of fundamental processes in atomic, molecular and optical physics as well in chemical physics from a few-body perspective. At the same time we want to understand the physical processes at the border  between different subfields of AMO physics. In particular, our research focuses on:

Rydberg physics. We are interested in the theoretical study of fundamentals processes involving Rydberg atoms and ultra-long Rydberg molecules at ultracold temperatures. One of our goals is to reveal the ultimate nature of the exotic decay of a Rydberg atom immersed in a Bose-Einstein condensate, where hundreds or thousands of atoms are within the Rydberg orbit. In particular, we have found that several chemical processes are behind the scenes of such a decay. The study of Rydberg molecules is focused on the possible applications of these exotic molecules in many-body physics and how these homonuclear molecules with giant dipole moments can change the paradigm of dipolar quantum gases in condensed matter physics.

Cold chemistry. Our interest in this field relies on the study of chemical reactions at cold temperatures (T~mK)  involving neutrals and ions, such as three-body recombination, and non-reactive collisions, such as vibrational relaxation of molecular ions through collisions with neutral atoms. These studies are relevant for the development of high precision spectroscopic techniques for molecular ions as well as for the ultimate understanding of dynamics of cold molecular ions in hybrid traps.

Photonics. We exploit the strong light-matter coupling of cold atoms near photonic devices to study and design novel platforms for the formation, control and cooling of ultracold molecules. Moreover, since molecules can also strongly couple to nanophotonic crystals it seems possible to realize quasi-deterministic molecular formation protocols that would allow one to control the number of molecules coupled to the photonic device, and hence it would open the possibility of single event ultracold chemistry and the study of the transition from few-body physics to many-body physics in a molecular array.

Quantum chaos. In our group we ask ourselves a simple question: how does classical mechanics emerge as a limit of the quantal behavior in a complex system? To answer this question we simulate classically and quantum mechanically the dynamics of a given system, and through the very interesting random matrix theory we can have some hints about the origin of the quantum chaotic behavior in a given system. On the other hand, thanks to the classical simulations we may be able to find interesting correlations between classical magnitude and quantal observable, thus finding the pillars of the classical-quantal correspondence principle in non-linear dynamical systems. In particular, we have studied how quantum chaos emerges in dipole-dipole interactions at ultracold temperatures, revealing the basic classical-quantal connection behind scene. 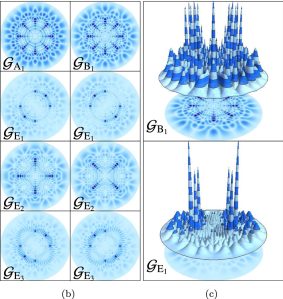 Q : What motivated you to pursue this field of research?

My motivation relies on the multidisciplinary aspect of this field of research which brings the opportunity to face the most intriguing and challenging problems lying on the border line between different fields of physics and chemistry. Moreover, I believe that in these borders is where the most challenging and interesting problems are, as well as being where the big leaps of science may occur.

Q : Where do you think the field is heading?

I have the impression that AMO physics is evolving towards three different general lines of research. The first, dedicated to the study of fundamental processes relevant to other disciplines, such as condensed matter physics or general relativity, owing to the exquisite conditions of ultracold atom experiments to simulate a multitude of different physical scenarios. The second revolves about AMO physics as a tool to develop new technology with applications in the technology sector, such as quantum information and photonics. And finally, the third line is devoted to the study of traditional problems in AMO physics, i.e., the questions that triggered the field at the beginning, but nowadays have motivated new questions to reach a better understanding about the realm of atoms and molecules.

Q : What do you consider to be the hot topics in AMO physics at the moment?

Looking at the journals in AMO physics as well as attending to conferences, I have noticed that the field is moving towards four main topics (from my perspective) :

Many-body physics with ultracold atoms. Ultracold atoms offer a unique scenario to design and test many-body Hamiltonians which may have a huge impact on the condensed matter community.

Polaron physics. Although this may be considered as a sub-discipline of many-body physics with ultracold atoms, it is certainly growing thanks to the development of exquisite experimental techniques to study impurities in ultracold gases. From the study of impurities in quantum degenerate gases we could learn more about polaron problem in condensed matter physics.

Rydberg physics. The intriguing properties of Rydberg atoms and molecules make them excellent candidates for a variety of promising applications such as quantum information, many-body physics, quantum memories and cold and ultracold chemistry, among others. This field of research has been always part of the AMO community, but in the last couple of years or so, the general interest of the community for these exotic entities has grown considerably.

Ultrafast processes. The study of ultrafast processes is basic for the understanding of the electronic degrees of freedom involved in a large number of fundamental processes such as photo-ionization, charge-transfer reactions, and different association reactions. In other words, the study of physics at the attosecond level is fundamental for the ultimate understanding of the role of the electrons in reactions, as previously femtosecond lasers revealed the role of rotational and vibrational degrees of freedom in chemical reactions.

Q : Who inspired you to become a scientist?

Several people have played a role in my decision to become a scientist, or in the path to it. In particular, my parents taught me what is hard work, supported me in all my decisions and helped me to follow my dreams, indeed still today, they are always on my side, telling me nothing is impossible. Another person that has had a huge impact on my career was my Physics professor at high school, Don Juan Navarro Manjarín. He awoke on my the curiosity for the most formal aspects of physics, and in particular for the study of science from a theoretical perspective. I always had the most interesting chats about science of my life with him, and he always pushed me to pursue my dreams and study physics.

Q : What would you say to a student who wanted to shape her or his future with a career in science?

The path to become a scientist may seem hard, and on top of that one may think that some fields are better than others which clearly complicates your decisions about what to do. However I do not believe in that. What I believe is that at the end, if you work hard you will find your place. Do whatever you like with passion and put best attitude every day, fight for your dreams and never give up.

On behalf of JPhysB I would like to thank Dr Pérez Ríos for answering our questions and for recently publishing the Topical Review “Controlling Rydberg atom excitations in dense background gases” in our journal.

Dr Pérez Ríos’ above cited articles are published in our special issues on Rydberg atomic physics and on the Atomic and Molecular Processes in the Ultracold Regime, the Chemical Regime and Astrophysics

Like Loading...
‹ Are you going to ARIS 2017?
Image of the week: Phase behavior of ternary oxide layers ›