Home › Journal of Physics A: Mathematical and Theoretical › Bell scenarios with communication: an Emerging Talents Lab Talk with Jonatan Brask

In the recently published Emerging Talents paper in Journal of Physics A: Mathematical and Theoretical Jonatan Brask and Rafael Chaves investigate Bell scenarios with communication.  Emerging Talent, Jonatan spoke to JPhys+ to explain more about nonlocality.

Classical and quantum physics provide fundamentally different predictions about experiments with separate observers. Quantum systems show correlations stronger than any possible classically. This phenomenon, known as nonlocality, is central to the foundations of quantum physics, and at the same time holds great technological promise. Nonlocality enables information processing with an unprecedented level of security for cryptographic protocols and random number generation.

A key assumption in studies of nonlocality, is that the observers cannot communicate. In our recent paper, we investigate what happens when this assumption is relaxed. This gives new fundamental insight into quantum nonlocality, and may enable new applications where security can be established under less strict assumptions. To arrive at our results, we used methods from the mathematical theory of causality. 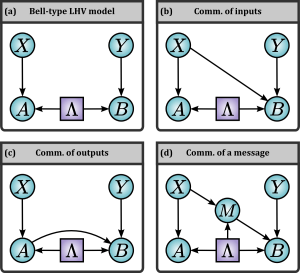 In this language, a classical model for an experiment associates each input and output to random variables, which have causal influences on each other. In addition there may be hidden variables which are not observed. This can be represented by a graph, where the nodes are the variables and the arrows indicate causal influence. Fig. 1a shows a classical model for a typical nonlocality experiment. Two observers have inputs X,Y and outputs A,B respectively, and there is no communication between them. The classical model imposes testable restrictions on p(ab|xy), famously known as Bell inequalities. If any of these inequalities are violated, the data is incompatible with the model. In that case, either the devices in the experiment are not classical (i.e. there is quantum nonlocality), or the causal assumptions of the model are violated. By adding additional causal links in the graph, we can relax the no-communication assumption. In our study, we do that in several different ways, as shown in Fig. 1b-d. This allows us to understand how robust nonlocality is, by answering the question: How much communication is required to restore a classical explanation of given data?

Our results indicate that the causal model framework could facilitate both practical applications, such as stronger cryptographic protocols, as well as new fundamental insights into the nature of quantum correlations. Both directions for future research.

Jonatan Bohr Brask is a senior postdoctoral researcher in the Quantum Correlations group at the University of Geneva, led by Prof. Nicolas Brunner. He previously held a postdoctoral position at the Institute of Photonic Sciences after completing his Ph.D. at the Niels Bohr Institute.