Biological cells have a wide range of complex functions, and a number of these are driven by tiny, molecularly generated forces acting within the cell. We asked Dr. Meenakshi Prabhune to talk to us about the latest tools for measuring these tiny forces; read on to find out what she had to say. If you would like to learn more, you can find Dr. Prabhune’s latest review “Molecular force sensors to measure stress in cells“, published recently in JPhysD, available now on IOPscience.

Forces are involved in several processes in cells. Pulling apart the spindle fibers during cell division requires forces, as does pushing the cell forward during migration. Forces acting on the components involved in any process span a large range. For instance, cells play tug-of-war to simply coexist with the neighboring cells in the tissues, exerting hundreds of nanonewtons forces on one another.  If we zoom in on the machinery involved in this process down to the single protein level, the forces are 1000-times smaller.

Over the past few decades, scientists developed techniques like traction force microscopy to measure forces exerted by cells on their substrate or on one another. But measuring the molecular forces inside cells was challenging. Recently, tiny force sensors have been introduced directly inside cells to measure small forces and stresses in cells. Although the calculated stresses depend on the geometry of the attached sensor, we can determine relative changes in the intracellular stress at high resolution.

These force sensors typically consist of a spring-like material that links two fluorophores for visualizing the forces. The fluorophores are selected such that one of them absorbs the energy emitted by the other, and fluoresces with a particular colour, if they are within a few nanometers of each other. If an exerted force stretches the linker, the distance between the fluorophores increases. Then, the initially dominant fluorophore can no longer accept energy from the donor and stops fluorescing. The outcome is either a loss of colour or change in colour (the donor fluoresces now), depending on the properties of the selected fluorophores.

One category of sensors are the genetically encoded force sensors. In these sensors, the DNA strands encoding the linker and the protein of interest are fused together in the cells. One example is the vinculin sensor: it measures forces on the protein vinculin, which aids attachment of the cell to its substrate. These sensors can measure small forces, as low as 1 pN. However, their size, and thereby force range, is limited. Also, as they are fused to particular proteins, their applications are not universal.

The second category, alternative force sensors, are externally introduced in the cells. These sensors can be constructed from different materials: proteins, polyethylene glycol, or DNA. They are functional across a broader force range than the genetically encoded sensors. So far, they have only been used for force measurements on the cell surface, but not inside the cells. 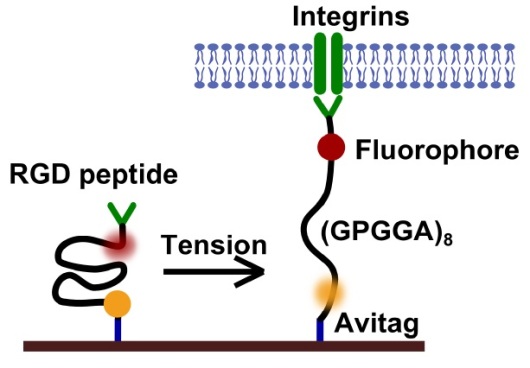 Although we have made progress in the molecular force sensor designs, there is scope for improvement. The ideal sensor should combine the benefits of both the existing sensors. In our review, we suggest sensor designs incorporating the desired characteristics of an ideal sensor.

Dr. Meenakshi Prabhune transitioned into science writing and journalism after her PhD in biophysics. She is passionate about science dissemination, and specializes in writing informal articles based on latest research papers. Her articles can be found on her blog and portfolio.

Dr. Florian Rehfeldt leads the ‘Cell & Matrix Mechanics Group’ at the 3rd Institute of Physics, Georg-August-University Göttingen. His research interests focus on mechanics of cells and their effect on cell behavior.

Prof Christoph Schmidt is a group leader the 3rd Institute of Physics, Georg-August-University Göttingen. His research focuses on molecular and cellular biophysics, studying the mechanics and dynamics of living systems on all levels.